Did you already heard about the tribe of Sockstar Monster? They were born in 2009, in a nice Swiss city, St. Gallen, thanks to an idea of Clarissa Schwarz, graphic designer at creative agency Büro Sequenz.

The first puppet she ever made, Po, was a birthday gift for a friend of her. The second for her friend’s brother, the third for a colleague of him and… the word of mouth started to show its first effects very soon. Indeed only in 2009 Clarissa produced – all by herself – 374 Sockstar Monsters!

The first idea was suggested by the Sock Monkeys, puppets that were born during the Victorian Age but that became very popular only at the end of 1800, when Swedish immigrant to the United States, John Nelson, patented the first machine to sew them. In 1880 the Nelson Knitting Company started selling them as Nelson Sock. Today they are still iconic toys and you can find vintage examples mainly from the 1950s and 1960s.
The funny, colored puppets made by Clarissa are filled with cotton and are more than 2.000 now. Clarissa told us that – until they were only 200 – she was able to remember every and each name. Now it is a little bit more difficult!

Our personal first encounter with a Sockstar Monster was in Zürich some months ago. It was love at first sight and Hugo became very soon a kind of mascotte for The Design Pot: he was made with socks that match perfectly with our color palette and we loved it.

To make a sockstar monster Clarissa needs a pair of socks, some cotton and a couple of buttons for making the eyes. The rest really depends on her fantasy and her inspiration that comes from everyday life. Things that can be inspirational? Interesting designers and graphic designers, movies such as the ones by Tim Burton, music, crazy stories and books. Many names of her Sockstar Monsters come from the New Dictionary of Names by Walter Burkhart. But there are also many people who give Clarissa inputs and ideas and she uses to listen to them, reinterpreting everything according to her experience and taste.

Every monster is unique, is something rare that people can also personalize.She would be very happy if they can remain “one-of-a-kind-creations”. Once Clarissa received an offer from China: making 3.000 puppets for 3.000 francs but she refused to stay loyal to her principles and philosophy. She is dreaming about a big party for her 10th anniversary in which every owner of a Sockstar Monster can bring its own. It is a cool idea, isn’t it?

You can choose the Monster you love most directly on her brand new website (with an integrated shop) or finding them in stores located in Luzern, Zürich, St. Gallen, Winterthur and Appenzell. Among the short-term objectives, Clarissa would be glad to receive requests for production from Bern and Basel: after that, almost all Switzerland would be covered.

During our interview we asked Clarissa a couple of questions more. The first was about her design icons: the toy industry is pretty new to us and we were curious about the answer. She replied saying that she admires the toys made by „RevoluzZza – DIY for Kids“. The interview was closed by a fun invitation. Each monster is adopted by people who buy it, has a name, a date of birth, specific characteristics and dimensions and can be your best friend in many everyday life activities. But they really love to travel and on Instagram Clarissa shares pictures of traveling monsters that are discovering the world! Did you already sent yours? Let us know what is your favourite Sockstar Monster in the comments below! 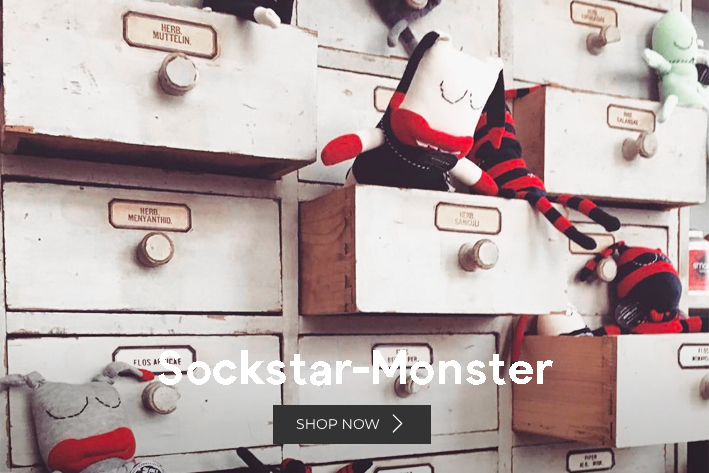